Appearance: Agarutz, a young and developing Saiyan, is lacking some of the height he feels he should have. Agarutz stands at a sturdy five foot four inches, and would render him fairly short; however, he should not be taken lightly as where he fails to stand tall he has muscular mass. His hair is of medium length, and keeps held a very dark brown pigmentation captive in the strands of his hairs. As with most Saiyans, Agarutz possesses a tail that is just long enough to coil about his waist.
(Picture does not show tail; however, he does possess one.) 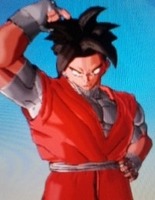 History: -A Warrior in the Making-

"Come on boy, I know you're stronger than that!" exclaimed his father. It was a family training session and a new challenger has appeared, Agarutz. "I can sense it. You're hiding something from me." said his father, clearly taunting his child into using much more forceful attacks. Deep, heavy collision noises rang out through the land as the child matched his father blow for blow. A single bead of sweat dripped from the father's brow. "I know that you're only thirteen, but I'm already being shown the door. Now give me all you've got!" barked the man as he prepared himself for a potentially painful blow. Agarutz' father desired to be called 'Vert' by those who failed to remember his name. Vert had himself classed as a low-class warrior, but had returned to his home planet shortly after he had conquered the planet he had been sent to.

"I possess little interest in killing you father, but if you insist!" rang out the deep voice of Agarutz. His father might have been labeled low-class, but his son certainly had not been. Permission had been given to the family of this warrior with youth shining in his irises to allow the child to train with his father. Vert was never told this but the request had been accepted mostly due to the fact that the other Saiyans wanted to see just how much this child would surpass his father and laughed at Vert secretly for being weak. Silently the boy charged, he swept in a semi-circle the immediate area below his waist and tripped his father. Then without hesitation he flipped around and brought his leg down into Vert's back. The older Saiyan roared in pain as a thunderous crack was heard, and sounded almost as though lightning had struck the man. Agarutz gripped the dark brown hair of his father and without thinking tossed the broken Saiyan above his head. A step back was taken and a moment waited. The gladiator of youth flipped backwards, but remained stationary as his leg struck his father and hurled him further above the ground.

~So this is what it feels like to fly.~ thought Vert as he soared high from the soil beneath him. Vert never developed the skill of flight and had conquered his planet on the full moon. Soon his son appeared next to him and with two hands clenched together Vert was sent crashing to the ground. Following that was a red tint that tainted the vision of the decrepit Saiyan who lay defenseless on the ground. Solemnly Vert lifted his index and middle finger to his lip and wiped the blood away.

"I should apologize. I failed to accomplish your demise at expedited pace I should have done this while I was an infant. Farewell you spineless dotard!" bellowed the Saiyan Agarutz as he let that red tint go forth. Saiyan Guilt is a funny thing. To cover what this means, one would first describe the Saiyan race. The Saiyans are a race of planet-conquering warriors who take pride in their strength. Guilt is the fact of having committed a specified or implied offense or crime. In other words you feel bad about something you have partaken in. Saiyan Guilt could be defined as Warrior's Guilt. To feel sorry for not having killed something or someone at a much more rapid pace. The once charged glow erupted into a focused laser from the right hand of the teenager. The very same blow that would end the life of Vert. The man he once called father he now called ash. When the dust cleared it was evident that the deed had been done. There lie the lifeless corpse of the man known as Vert and the father of Agarutz. "I'll never forget what you told me, old man. I shall always be stronger than I was before."

Three years passed since the murder of Vert, the now sixteen year old Agarutz is found training. "One. Two. Three." counted the dark-haired felon. Well, felon to the justice system of Earth. On Planet Vegeta this is certain to be found a casual occurrence. "Eleven. Twelve. Thirteen." he continued. One handed push-ups would have been difficult for any human to do let alone at ten times the gravity of Earth. "Thirty. Thirty-One." he maintained. Simple training for upper body strength remained the current self given assignment of the Saiyan. "Forty-Nine.. Fifty!" he announced as he pushed upward with his right hand and swapped to his left. "One. Two. Three." he began once more. His movements were slow. This was intentional as he hoped to stress his muscles out further by decreasing the speed by which he descended and ascended, forcing his muscles to bear his weight for an increased duration of time. The seconds of each minute ticked on. His time was running out. This was going to be the last day in the family home and he knew it. Tonight was the night of the full moon. "Forty-Eight. Forty-Nine. Fifty. Just one more... Fifty-One!" he said as he finished his workout. "Too easy. I'll need to increase the repetitions I perform next time."

A few hours later the boy could be seen looking at the moon rise. Just five more minutes before he would transform and destroy his father's property. The clear craters on the surface of it shone to him like no other. How beautiful it was. A definite shame that the moon only chooses to go full once every eight years. A devilish smirk crossed his lips. "This is going to be fun. Shame I won't have any recollection of it afterwards." he sighed knowing fully that he had no control over his Great Ape form. The only thing he would recall would be the pain of the transformation. "Time is up." Agarutz states as he removes his clothing temporarily. One thing he knows for sure is that he can find the location by the rubble and ruin of the house and land surrounding it. Leaping into the air, he flew himself atop his home and landed himself on the roof of the building he once knew as his house.

The moon was at its peak and the clouds moved as it revealed to the Saiyan that it was indeed full. The blood of his ancestors burned in the veins of his body. It had just begun and he could feel his bones changing. He looked at his arms as the hair on it grew twice its length for the moment and shouted as the shape of his face was contorted. His jaw shifted forward a bit before the area about his mouth grew outwards into a furry snout. His foot felt strange. Pain show across his foot as the bones in his toes were the first to grow. "AHHHH! AH-AHHHH!" screamed the soon to be gorilla. His toes grew as well as the hair. Swiftly followed the remainder of his body, not wanting to be severed in the rapid change of bone size and mass. The Saiyan grew to an ape of monstrous proportions. The screams of agony that poured from the throat of the teen soon shifted and erupted into an even deepened roar, thus completing the transformation. He broke in to a frenzy, firing blasts everywhere and smashing whatever crossed his sight. The building he perched himself upon cracked under the weight of the beast and soon fell to ruin before the monster lept forward, ensuring the destruction of the structure and soon began smashing landscape. This continued until the next day, and everything was calm. Agarutz stood up and stretched finding himself aching from the physical stress of the transformation. He retrieved his clothing articles and then looked around. "I did a pretty sweet job of wrecking the place. That's for sure!" Following this he took to the sky and flew off to find a more suitable training ground. As he flew off the sounds of his laughter could be heard like the low tones of the organ on a Sunday morning in church across the land.

[N1] ~Saiyan Guilt - Agarutz holds one hand up and releases a red beam of ki energy from it. This move is chargeable, and is the weaker equivalent to Full Power Energy Wave. He does not announce the name of it upon use.

[SU]~Tail Pain Tolerance Training - This is the training that allowed the Saiyan invaders Vegeta and Nappa to withstand their tails being held. As far as I am aware, it was given no special name.

History seem fine.
Everything seems quite reasonable.
Though I'd like you to label your techniques with their proper tier.

So, Saiyan Guilt I'm assuming is an UP2 while flight would be an SU1.

If that isn't the case or you don't know what I'm referring too. Please, Take a visit to the mechanic's of the site!


Once you update that, reply here! and I'll double check!

Otherwise, once that's touched up on. You're good to go!